Hope you all have a prosprorous century. This will probably be the last post from this website.

We do not have the man power to manually manage all the various forms of social media we use, i.e this blog, facebook, twitter, the forums & discord.

The site will be converted to a static landing page after KCNR V is released. With most of KCNR website archived.

KCNR is still alive strong, support is not going anywhere. The focus is currently on KCNR V. Join our discord to stay updated at https://discord.me/kcnr.

Hello everyone. I hope you all are having an amazing December.

We at KCNR wish you all a Merry Christmas! May the season bring you many goodies and love! We wish you a good luck in your exams and a season greetings.

We are upgrading to SA-MP 0.3.DL (this is an alternate version to the current SA-MP 0.3.7). This version gives us a wide range of new features to work with. You will not be able to play KCNR without it!

Here’s a quick overview of the update!

Some displays have been visually updated
Added KCNR logos (seasonal) to cinema mode
Added a bunch of new skins that can be either earned or purchased
Added various skins for purchase in the bonds store (Once purchased, it’s stored on your account forever)
Added various clothing items for purchase in the bonds store
Use /skins to access your skins (most skins are team restricted)
You can now choose what city where you want to spawn per team
For each team you must go to their respective HQ locations (pd desk, city hall, hospitals, fire refill)
Your wanted level reduces faster if you wear a Balaclava and their is no police in immediate sight
St Patrick’s day yearly event will be held on March 17th every year from now on
Added /selfie (puts you in a selfie mode to take cool pictures)
Added a church in Los Santos, Jefferson
Disabled default GTA SA bomb shops

“Stick-ups” -> “Stickups”
Stickups are now turn based. Each player has 5 seconds per turn to commit an action
Stickups now move the player’s camera to an overhead side view
When a stick up is initiated, any one of the players gets the first turn
During a stickup, if 4 consecutive turns are missed then the stickup automatically ends
Screams are now sent in a random range for other players to hear

Increased maximum turf money pick-up ($1000 -> $5000)
A maximum of 5 gangs can now attack a turf at a time (meaning 6 gangs in a war)
On group removed, owned turfs that are being provoked, the highest attacker now automatically wins the war
If you are attacking someone that’s in a turf war already, you’re gang will join the war
Increased the amount of damage your gang has to do to defend or take over a turf

Season Greetings to all!

[Rw]Joel captured the most reindeers this Christmas – 138 Reindeers.

Nerox found the most gifts this Christmas – 508 gifts.

john received the most gifts this Christmas – 497 gifts.

We wish everyone a happy new year! 2018 has a lot of great things to come!

You can enjoy a 50% discounts on all ammunation weapons, unowned houses and businesses, autobahn vehicles and stuff like name changes and donator ranks in the bonds store!

As per usual, the halloween update was automatically applied in-game a few days ago and is running until the 7th of November.

Version 20 is complete! This is the biggest update ever to hit kcnr, it took over a year to complete. It has the most game feature additions ever, ranging from impounds, airport robbery, gambling, game clubs, fires, arrest evasions, localisation, robberies, street racing, government improvements, SA Customs, personal vehicles, advanced vehicles, random npc citizens walking the streets, dealing improvements, and many MANY more updates. 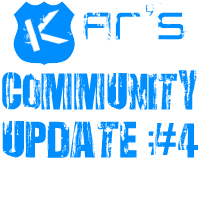 So, we have a lot to talk about. We haven’t had a community update for more than 2 years, damn!

Sup guys, so it’s Kar here.. obviously. So as you’ve all noticed we’ve been through a VERY rough couple of months and needless to say you all have noticed how inactive I and the admin team have been over the past couple of months and I now with great pleasure to say that no longer will you see such failure coming from me or KCNR. 2017 has probably been the worse year for us with all these attacks especially in February.. it all started going downhill from then. There wasn’t much we can do about it. Players from certain countries started causing constant rampage on the server, even players from my OWN country started and are still causing rampage on the server. We decided to temporarily ban these countries. It helped bring the server back to a calm state but losing a lot of players. It was worth it in my opinion. I don’t know what’s wrong with some of these players, some of them don’t even hate KCNR, they just want to cause rampage.

KCNR got it’s popularity because it was a server that people could come in and play without any disturbances, any cursing, any rdmers. It was once paradise. I don’t know where that paradise has gone.

From today, I stand to bring this paradise back. Bring KCNR back to quality. Bring back constant updates. Version 20 is ending early, it took too long to complete. Version 21 will begin shortly. As you’ve seen, the website’s theme has changed and little things have been smoothened out around the website and forums. I’m actively working to make everything seamless and bug-free.

In other news, SA-MP has received a very minor server update and a client update is upcoming, fixing issues with the launcher and hosted list from all these servers that are filled with bots. Also I’d like to say that SA-MP was also being attacked over the past couple of months and we got caught in that loop. A result of this is the hosted list has increased to $30 USD a month which is double what we used to pay which is now why we have a monthly donation goal (you can see it at the side ->). We really need this in order to keep the server running.

Tomorrow the server will be moved back to Europe (This is our first step in getting back in line with our players).

I’d just like to thank Peter for even being so busy with work, is still supporting us in EVERY way that he can.

Thank you for your continual support for the server and let’s work together to rebuild what we have lost!

Hope you guys all enjoyed the parties and chocolate shaped colored eggs!

We have introduced our new V.I.P Membership along with Valentines day! Please click here to find out more details.